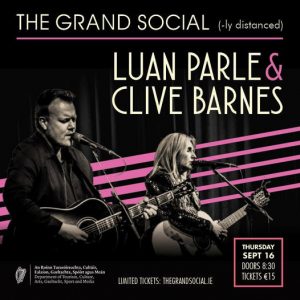 Accompanied by renowned guitarist Clive Barnes, Luan will be playing songs from her latest album ‘Never Say Goodbye’ released last year to critical acclaim as well as songs from her back catalog.

Clive is highly regarded as one of the finest performers on the roots circuit and has been gaining a worldwide reputation as one of the finest songwriters and guitarists on today’s scene. Having released four critically acclaimed albums of his own, he has played and recorded with some of the finest musicians on the world stage including Joe Cocker, Taj Mahal and Eric Bibb and also shared stages with Dr John, Jeff Beck, Solomon Burke, The Blind Boys of Alabama, & Gary Clark Jr to name but a few.

“Clive is a guitarist who can make one guitar sound like six. Balancing intensity with between song banter that would challenge any stand-up, Barnes’ songs were a revelation.”

“With a voice pure and true, Luan Parle sings from the heart but aims for the gut.”