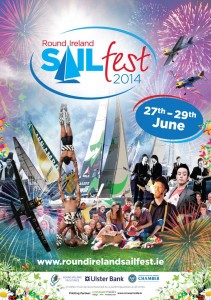 Time : TBC
Venue : Sailing Club
Address : South Quay Wicklow
Contact Website : https://www.facebook.com/pages/Wicklow-Round-Ireland-Sailfest/116541711693851
Luan Parle will once again open this years Round Ireland Sailfest at her hometown of Wicklow. Luan will officially launch the festival. Luan was the face of the festival in 2010.

The Round Ireland Yacht Race is the longest race in the Royal Ocean Racing Club (RORC) calendar, comparable to similar Offshore Races such as the Fastnet, Malta Middle Sea, Sydney-Hobart and China Sea races.

The first race took place in 1980 with only thirteen boats. Since then, held biannually, the fleet has grown steadily, and in the order of 60 yachts are expected to participate this year.

Sailing around Ireland poses many challenges for boats and crew, with open ocean on the south and west coasts, tidal challenges on north and east coasts apart from all the off lying rocks and sandbanks to keep navigators on their toes and not forgetting the vagaries of the Atlantic weather systems.

This is very much a sailors race but armchair spectators can follow the race on their computers, thanks to our modern race tracker technology.

The Round Ireland Yacht Race Sailfest will complement the race preparations and add a welcome level of fun and entertainment for all coming down to Wicklow Town for the race start!