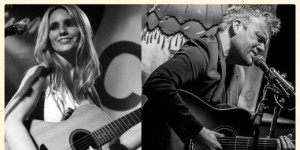 Time : 8pm
Venue : Bob's Hideout
Address : Bob's Bar Durrow, Durrow Townparks, Durrow, Co. Laois
Phone : +353 87 61654854
Contact Email : [email protected]
Contact Website : /www.bobsbardurrow.com
Two of Ireland’s finest songwriters and performers Luan Parle and Clive Barnes have for many years been gaining an international reputation as solo performers. For the past number of years they have been performing together to sold out audiences across Ireland, US & Europe.

Parle released her critically acclaimed album ‘Free’ in 2007. To date she has released 3 studio albums and is currently working on her latest material due for release this year.

Barnes has played numerous US, UK and European Tours and taken various awards, Including Album of the Year for “Welcome to Farewell” in the US magazine ‘Acoustic Guitar’. His new project ‘Haunted Head’ is due for release in the coming months.