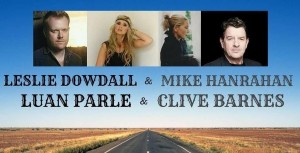 Four of Ireland’s finest are coming to a venue near you to showcase their song writing and performing talents in an intimate setting.

Leslie & Mike, Luan & Clive will be collaborating to bring you an eclectic and exciting mix from four of Ireland’s finest Singer Songwriters. Not to be missed.