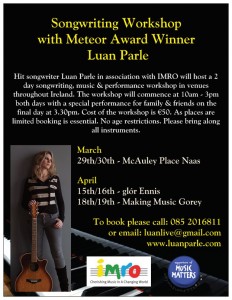 Time : 10.15am
Venue : glór Ennis
Address : Causeway Link
State : Clare
Contact Email : [email protected]
Contact Website : http://www.glor.ie
Songwriting Workshop with Hit Songwriter Luan Parle
Following the success of ‘My Hero’ a song which was written with Luan Parle during one of her songwriting workshops and performed by a group of transition year girls from Clonmel, Meteor Award winner Luan will host a 2 day song writing workshop in venues around Ireland. The song which was released for charity just before Christmas topped the itunes chart at no 1 & reached no 7 in the Official Irish Charts with Paddy Power taking bets for a Christmas no 1.

Singer/songwriter Luan Parle most notable for her top 10 hit ‘Ghost’ will host a 2 day songwriting workshop at McAuley Place Sallins Road Naas Co Kildare March 29th & 30th. The workshop will commence at 10am – 3pm both days with a special performance for family & friends on the final day at 3.30pm. This will give the budding songwriters a chance to perform the song written during the workshop to a live audience. During the workshop we will also touch on recording and releasing your music. Cost of the workshop is €50. As places are limited booking is essential. There are no age restrictions. Bring along all instruments.

“The workshop focuses on songwriting, performance, and the latest developments in the music industry. By the end of the workshop, the budding songwriters will have written and performed an original song collectively. This is a unique and fantastic opportunity to get hands on experience of the day to day work in the music industry whether you aspire to be performers, songwriters, or work in music administration.” IMRO