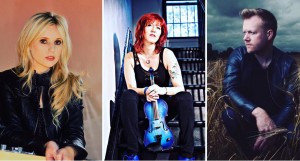 This April Luan & Clive are teaming up with New York City-based pop/rock singer/songwriter and classically trained violinist, Deni Bonet. Deni has recorded & performed with Cyndi Lauper, REM, Sarah McLachlan, Indigo Girls, Warren Zevon, Ireland’s own Mundy, and many others, as well as performing her own music around the world.
Deni Bonet has a reputation for high-energy performances and particularly for her dynamic violin playing. Performance highlights include shows at Carnegie Hall, the United Nations, the Great Wall of China, and the White House for President Obama, the First Lady and Vice-President Biden. Her music has been featured on HBO, NBC, American Airlines, several film and modern dance projects, and has been described by the Wall Street Journal as like “Sheryl Crow meets the B-52’s”.
Deni’s brand new album, Bright Shiny Objects, has just been released on Zip Records/Sony-RED, and is already receiving incredible reviews from some of the most prestigious music publications.
Meteor & Tatler Award winner Luan Parle has had numerous hits & accolades. Her top 10 hit single ‘Ghost’ spent three months in the Irish Charts and was the most played Irish single of that year.

Roll The Dice was a Luan’s last EP release with 3 single releases from the EP titled ‘Day Is Done’, ‘Roll The Dice’ & You’re Not Here. All single releases topped the iTunes Chart, with ‘Day Is Done’ peaking at no. 8 in the Irish Airplay Charts & no.35 in the overall airplay charts, reaching an audience of almost 8 million listeners.
Parle released her critically acclaimed album ‘Free’ in 2007. To date she has released 3 studio albums and is currently working on her latest material due for release in 2018.
Clive Barnes is highly regarded as one of the finest performers on the roots circuit and has been gaining a worldwide reputation as one of the finest songwriters and guitarists on today’s scene.
Having released four critically acclaimed albums of his own, he has played and recorded with some of the finest musicians on the world stage including Joe Cocker, Taj Mahal and Eric Bibb and also shared stages with Dr John, Jeff Beck, Solomon Burke, The Blind Boys of Alabama, & Gary Clark Jr to name but  few.Barnes has played numerous US, UK and European Tours and taken various awards, Including Album of the Year for “Welcome to Farewell” in the US magazine ‘Acoustic Guitar’. His new album ‘Get Low’ is due for release in 2018.
This promises to be a very special night of music and an opportunity to see three world class performers together.